More than two years after the idea was first announced, the development of Atlanta’s “Premier Equity Project” is underway in the hope that it can help historic districts suffering from investment cuts and devastation. ..

A groundbreaking ceremony for the multipurpose front pouch project is scheduled for Wednesday at 300 blocks on Auburn Avenue in Sweet Auburn. The corridor between downtown and the Beltline contains the King Center Complex, but has not seen a resurrection comparable to the nearby Edgewood Avenue.

The Front Pouch Project is led by the Historic District Development Corporation, co-founded by Coretta Scott King 40 years ago to revitalize and rehabilitate Sweet Auburn and his historic neighbor, the Old Fourth Ward.

HDDC wants a front porch with a mix of residential and commercial spaces to inject life and work opportunities into Sweet Auburn and drive positive change. It’s called public transport-oriented development in that the Atlanta Street Car Loop passes directly in front of the site and MARTA’s King Memorial Station is a few blocks south.

Specifically, the 100,000-square-foot front porch is expected to contain 45 rental units and 16 properties for sale. (Invest Atlanta shows that in a $ 23 million project, affordable units will be limited to 60% of the median income in the region and condos for sale will be limited to 120% of the AMI. Basic rents range from $ 900 to $ 1,640 per month, and condos will sell for an average of $ 294,000, from studios to three-bedroom units, according to the project. Fact sheet From last fall. ) 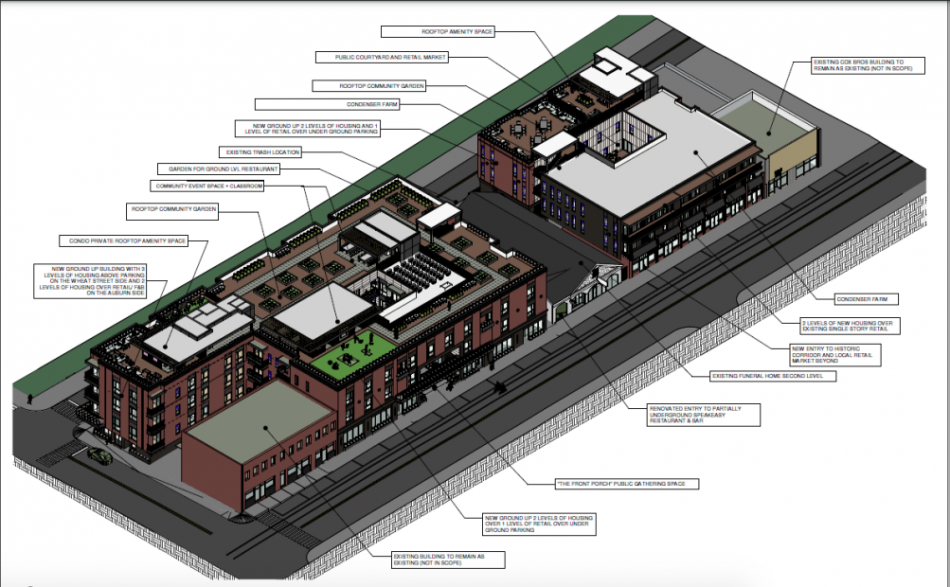 An overview of planned use in the block, with Auburn Avenue on the right. Historic District Development Corporation; via Invest Atlanta

The front porch also requires 25,000 square feet of commercial space called “community services,” and it is estimated that 80% of tenants are minority-owned businesses. HDDC officials say they will create 107 full-time jobs at Sweet Auburn and include six pop-up slots for local entrepreneurs.

Above most of the development, according to HDDC, is a 20,000-square-foot roof garden used to grow fresh produce for both tenants and communities.

The plan also includes the conversion of two buildings. It is now the Hauga Brooks Funeral Hall. Hauga Brooks Art Gallery and Event SpaceAnd a one-story retail building — as it is today.

The breakthroughs on the front porch on Wednesday morning include the partnership between Atlanta Mayor Andre Dickens, Invest Atlanta CEO and President Dr. Eloisa Clementich, and Southern Equity Founder and Chief Executive Officer Nathaniel Smith. HDDC CEO Sheny Joseph and others will be attending.

According to Invest Atlanta, the front porch will be completed in March 2024 and will be occupied until it stabilizes within about six months. Take a closer look at what’s coming in the gallery above.

Should you consider an adjustable-rate mortgage?