When The House You’re Listing Comes With Some Permanent Residents

The 17th-century farmhouse on Round Top Road in Harrisville, Rhode Island, looks like many of the historic homes found across New England, with its rustic siding and an American flag hanging above the front door.

But it conceals a much more captivating history than most. For Ben Guglielmi, an agent with Mott & Chase Sotheby’s International Realty in Charlestown, Rhode Island, the property would prove to be likely the most unique he had ever worked with as a listing agent for its sale, along with team member Benjamin Kean.

Guglielmi said in an interview that working with the sellers of the estate, Jenn and Cory Heinzen, and hearing their stories about the property was enough to shift his perspective on the supernatural.

“I am very skeptical when it comes to stuff like that, I tend to be sort of hyper-rational and the idea just makes me roll my eyes typically,” he said. “If I’m being honest, listing ‘The Conjuring’ house changed my attitude.”

During the 1970s, the house was inhabited by the Perron family, who claims to have been subjected to numerous terrifying events while living there including visits by spirits in the night. Another claim is the family’s matriarch appearing to be possessed during an exorcism, during which she purportedly spoke in tongues and was launched across the room with great force.

The family’s alleged experiences were eventually portrayed in the enormously popular horror film franchise, “The Conjuring.”

The estate was once the home of Bathesba Sherman, who lived there in the 19th century and was accused of practicing witchcraft, after the unexplained death of an infant she was caring for.

After the series of paranormal events unfolded, the Perron family was contacted by the husband and wife paranormal investigators, Ed and Lorraine Warren, whose participation is also portrayed in the 2013 film.

Guglielmi said the previous owners of the brown clapboard farmhouse told him about the regular occurrences they’ve played witness to in the house — most of them benign occurrences, such as books falling off shelves and furniture moving on its own — in addition to more dramatic happenings including shadowy figures or clouds of smoke appearing.

Just being inside the house was enough to persuade Guglielmi that there was something special about the house.

“From the very first time I went in I was pretty convinced there was something going on, I just couldn’t put my finger on what,” he said. “After talking to the sellers multiple times it was pretty indisputable.”

Guglielmi helped close an above-asking deal on the house, which fetched $1.525 million after listing for just $1.2 million. The previous owners paid just $439,000 for the house in 2019, but Sotheby’s looked to comparable houses with paranormal reputations, such as the Lizzie Borden house and with the assumption that it was one of the most well-known haunted houses in the country to determine the asking price .

TAKE A 3D TOUR OF “THE CONJURING” HOUSE

According to Guglielmi, paramount to the sellers was not finding the best offer, but finding a seller who they thought would be spiritually suited for taking over the house, and following their list of stipulations if they wanted their offer to be considered.

Among those stipulations was a requirement that all prospective buyers meet for an interview with the couple and agree that they would not live in the house, for their own safety, and to instead keep operating it as a business where customers could visit for a chance to commune with the spiritual world, as the Heinzen’s had.

What made finding a spiritually-suited buyer so important for the sellers, according to Guglielmi, was the sellers’ belief that the spirits inhabiting the house tended to respond to the energy of the living inhabitants of the house, and they felt there was a higher likelihood of the spirits acting aggressively if they encountered someone with negative energy.

“These spirits, or however you want to characterize them, feed off the energy of whoever is there,” Guglilemi said. “So it happens that the sellers are these very gentle, loving, positive folks so given the explanation that these spirits feed off the energy of the inhabitants it’s no surprise that whatever has been going on for the past couple of years in that house has been sort of benign.”

They found that spiritually-aligned buyer in Jacqueline Nuñez, a real estate developer from Boston, who put in the winning offer. According to her buyers agents,  Ricardo Rodriguez and Bethany Eddy of Coldwell Banker Realty in Providence, Nuñez was able to stand out from the pack — which included more than 10 offers — due to developing a pre-existing relationship with the sellers by attending an educational tour of the home right around the time it was listed for sale. The pre-existing relationship was especially helpful for the interview portion of the sale, according to Rodriguez. 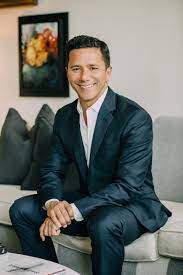 “They were looking for that connection,” Rodriguez said. “What she needed to be was authentic to that relationship that they were trying to establish, and I think that’s where she was successful.”

Nuñez plans to continue running the house as a business and told the Wall Street Journal that she wants to make the farmhouse a “place of love” and host special events with the Perron family.

Guglielmi said the previous owners admitted they were not the savviest of businesspeople, and that the new owner has an opportunity to turn the house into a thriving paranormal business. But most important for the new owner will be keeping a positive attitude.

“Try to stay positive in that house,” he said. “Do not introduce a lot of negativity, that would be my advice.”

360-square-foot house on Nantucket hits the market, for...

LBC Mortgage: Why You Shouldn’t Worry When Buying...