Wells Fargo said it will cut expenses in its home lending division with revenue down 33 percent from a year ago and 19 percent from the fourth quarter, to $1.49 billion, as millions of homeowners lost their incentive to refinance as interest rates rise.

“Mortgage rates increased 156 basis points in the first quarter and are above rate levels observed for most of the last decade,” Wells Fargo CFO Mike Santomassimo said on a call with investment analysts. “Reflecting this environment, we expect second quarter originations and margins to remain under pressure and mortgage banking revenue to continue to decline. We’ve started to reduce expenses in response to the decline in volume and expect expenses will continue to decline throughout the year as excess capacity is removed and aligned to lower business activity.”

Although Wells Fargo executives did not explicitly mention impending layoffs, the company has been closing branch offices. A number of mortgage lenders have downsized in recent months to adjust to lower refinancing volume, including Better, Pennymac, Guaranteed Rate and Keller Mortgage.

While mortgage lending accounts for a shrinking proportion of Wells Fargo’s revenue and profits, it’s the biggest player in home loans among the major banks.

The decline in its mortgage lending business contributed to a 5 percent dip in total first quarter revenue from a year ago, to $17.59 billion, with net income down 21 percent, to $3.67 billion, the company said.

Shares in Wells Fargo were down more than 7 percent after Wells Fargo released its earnings report, before recovering some of those losses to close at $46.35, down 4.5 percent from Wednesday’s close and 23 percent from a 52-week high of $60.30 in February. 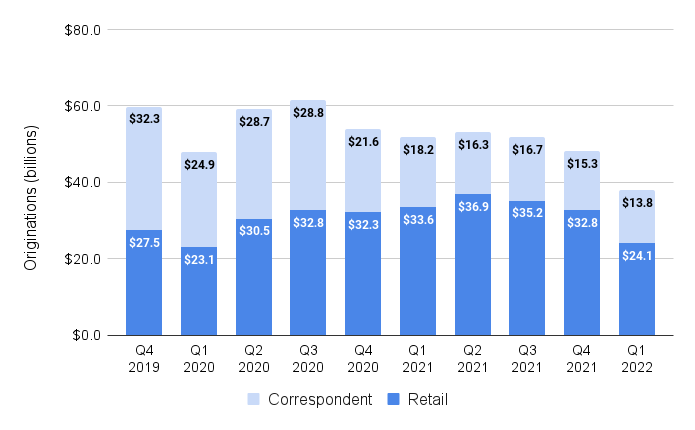 Wells Fargo originated $37.9 billion in mortgages during the first three months of the year, down 21 percent from the fourth quarter and 27 percent from a year ago.

Originations made by Wells Fargo’s retail branches were down even more sharply, falling 27 percent quarter-over-quarter and 28 percent year-over-year, to $24.1 billion. As of March 31, Wells Fargo operated 4,705 retail bank branches, down 2 percent from the fourth quarter and 5 percent from a year ago.

But loans purchased from correspondent lenders were also down 10 percent from the fourth quarter and 24 percent from a year ago, to $13.8 billion. 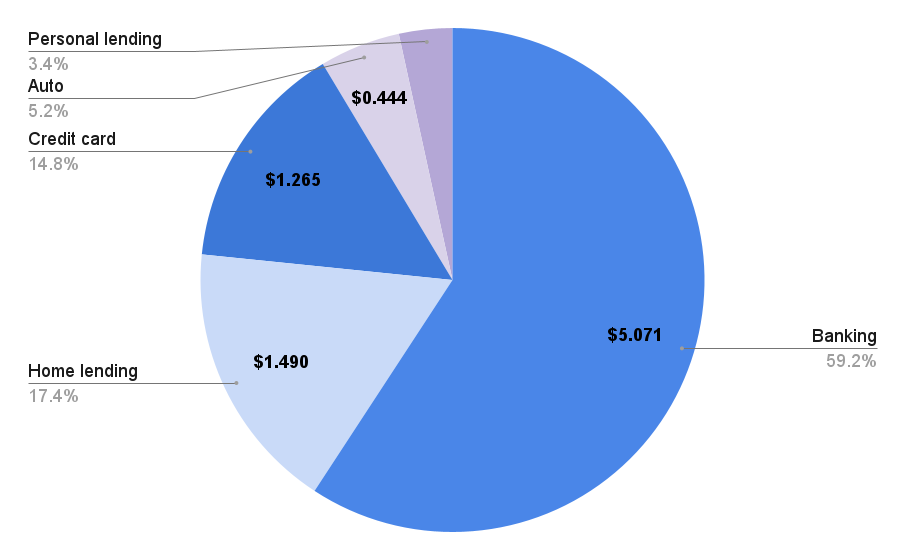 Santomassimo warned that the mortgage business has continued to deteriorate during the second quarter. As the refinancing business slows, lenders are fighting for purchase loan business from homebuyers, which cuts into profits.

“On the mortgage business, we will see a step down, given the pretty abrupt slowdown in the refinance market, in particular,” Santomassimo said. “We still expect to have decent volumes in the purchase market, but our gain-on-sale margins will definitely be impacted, given that there’s still a lot of excess capacity in the system.”

Wells Fargo CEO Charles Scharf said there is a silver lining: Rising rates will boost profits in the bank’s other business segments, as the spread widens between the bank’s cost of funds and the interest that it earns on loans and other investments

“Mortgage banking income is going to decline because rates are going up,” Scharf said. However, “We’re going to make much more on the increase in rates than we will on the decline in mortgage banking income. We’re continuing to focus on reducing expenses. Credit is still exceptionally good and certainly will be into the next quarter, based on everything that we see and possibly beyond, even though at one point, they will go up. And so, while we’re not sure what the overall economic environment will look like, that doesn’t change our point of view on the fact that we’re well positioned for it.”

Company executives blamed the drop in mortgage revenue on lower origination volumes and gain-on-sale margins, and lower interest income from loans purchased from securitization pools. The year-over-year drop would have been more severe, if not for higher mortgage servicing income.

Wells Fargo grew its mortgage servicing portfolio to $9.75 billion, up 19 percent from the fourth quarter and 10 percent from a year ago.

Despite that, noninterest income from mortgage banking was down 33 percent from the fourth quarter, and 48 percent from a year ago, $693 million.

While many lenders outsource loan servicing to companies that specialize in it, servicing is increasingly seen as a dependable source of revenue that also gives lenders insights into customers that can position them to offer homeowners refinancing when opportunities arise, or help them finance a new home purchase.

Scharf hinted at the potential for Wells Fargo’s servicing business to pay off in the long run, in responding to a question from investment analyst Charles Peabody of Portales Partners.

“You’re one of the few large banks that still has a relatively balanced origination and servicing side,” Peadbody said. “Historically, servicing was kind of viewed as a balance to origination. When originations didn’t do well, servicing would do well. But that hasn’t been the case recently in your recent history. And so, can you talk about how you’re managing it and why there isn’t a balance to those two pieces?”

Scharf said Wells Fargo executives “think about our mortgage business in the context of the whole company, not as a separate, independent entity that has to stand by itself. And so, when we think about the interest rate risk position of the entire company, that’s where we think about what potentially happens on the production side versus what happens in the MSR (mortgage servicing rights).”

Managing mortgage servicing rights is difficult, Scharf said, because “it’s got some very different types of risks embedded in it. And if all you did was look at those two as offsets, you could be kidding yourselves as to what the value of the servicing is. And so as I said, net-net-net, when we look at the position of the company, I would look at the reduction of mortgage banking income not being offset by the MSR, but being offset by the rest of the benefit that will get as a company [in terms of] net investment income.”

Young homeowners are in for a bit of...