Rising mortgage rates have severely curtailed the entire mortgage industry’s profitable refinancing business. But UWM says it’s been able to attract not only homebuyers, but mortgage originators who work for banks and other retailers, by offering better rates and the latest technology.

“Well, I didn’t know when, but I was confident this day would come,” Ishbia said on a conference call with investment analysts. “Because as I continue to say, brokers are the best place for consumers to get a loan and the wholesale channel is the best place for a loan officer to work. And that is why we are number one, together as a community with our brokers.”

Pontiac, Michigan-based UWM, the parent company of United Wholesale Mortgage, reported third-quarter net income of $325.6 million, and $684.2 million in revenue. Net income and revenue were essentially flat from a year ago, and both benefited from a $236.8 million increase in the fair value of UWM’s mortgage servicing rights.

UWM is already publicizing its leap to the top of the mortgage heap — Google “UWM” and a paid ad declaring the company “The New #1 Mortgage Lender” appears on top of search results. 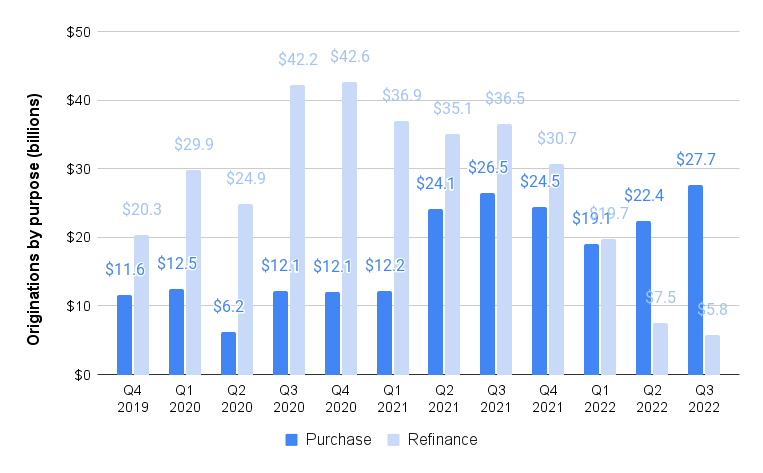 UWM’s total third-quarter loan production was down 47 percent from a year ago, to $33.5 billion, driven by an 84 percent drop in refinancing volume over the same period, to $5.8 billion.

But UWM managed to grow third-quarter purchase loan production by 24 percent from the previous quarter, and by 4.5 percent from a year ago — a remarkable feat, considering that interest rates have more than doubled over that time.

“At this point, I would hope everyone realizes we consistently deliver on what we say,” Ishbia said. “We said we’d dominate the purchase market. We just had our best purchase quarter of all time, and nearly $28 billion of purchase buying. We believe the combination of brokers and the real estate partners, coupled with UWM efficiencies in technology make for a championship combination for the American consumer.”

UWM announced a “Game On” pricing initiative in June that brought its rates down by 50 to 100 basis points (0.5 to 1 percentage point) across all loan types. A new service for mortgage brokers also announced in June, Boost, provides a lead marketplace and tools that help brokers stay in touch with past clients, connect with real estate agents and opt-in to receive live call transfers. UWM also operates BeAMortgageBroker.com, a site created to encourage retail loan officers, or anyone looking to get into the mortgage business, to become mortgage brokers.

“Since the start of Game On, we’ve had thousands of loan officers try for the first time experiencing our technology, our service and quickly realizing that partnering with UWM can help them win in any market,” Ishbia said. “We said that loan officers would migrate from retail to wholesale this year and accelerate during Game On. This has happened. We estimate over 17,000 loan officers have joined the mortgage broker channel this year, and about half of them coming directly from the retail channel.”

Slashing rates took a toll on a key metric — total gain margin, or the profit UWM makes when it resells loans to investors. At 0.52 percent, UWM’s total gain margin has shrunk by almost half, from 0.99 percent during the second quarter and 0.94 percent a year ago.

UWM expects to originate between $19 billion and $26 billion in loans during the final quarter of the year, with gain margin falling somewhere in a range of 40 to 70 basis points.

Although UWM has been willing to grow by making less profit on many of the loans it funds, Ishbia said the company hasn’t loosened its underwriting standards.

Ishbia took to Facebook in March 2021 to announce that UWM would no longer do business with mortgage brokers who send loan applications to rivals Rocket Mortgage or Fairway Independent Mortgage, claiming that those companies have attempted to poach mortgage brokers’ clients through their direct and retail channels.

Although UWM has been criticized over its “All In” initiative — and entangled in litigation as both a defendant and a plaintiff — Ishbia defended the decision to make mortgage brokers choose between working with UWM or two of its biggest rivals.

“We told you when we launched ‘All In’ in March of 2021 that this decision would help the broker channel grow and ultimately our share of the channel,” Ishbia said. “Some questioned us and thought we would lose brokers and market share. However, the exact opposite has happened.”

Ishbia said UWM’s share of wholesale channel mortgage originations has grown to 40 percent to 50 percent, as some wholesaler lenders choose not to compete on price, or leave the business altogether.

“There were a lot of uncommitted wholesale lenders in the market and, with Game on, some of them decided to exit because of their lack of efficiency and lack of commitment to the broker community,” Ishbia said. But with more than 50 wholesale lenders still in the game he said, “the decisions we make continually force every wholesale lender competing in the wholesale channel to level up their game, which is a massive positive for every broker and consumer in America.”

How I Flipped a Flea-Ridden Dump of a...