Rents are up 0.5 percent nationally from a month ago but significantly down from a growth rate of 1 to 2 percent, according to a new report released Tuesday by the online rental marketplace Zumper.

National rent prices are showing early signs of cooling as they hit new historic highs, according to a new report released Tuesday by the online rental marketplace Zumper.

Rents are up 0.5 percent nationally from one month ago, marking a historic high and a rapid rate of growth, but significantly cooler than the growth rate of 1 to 2 percent seen in previous months, according to Zumper.

Meanwhile, the price to rent a two-bedroom apartment dropped significantly, falling 2.9 percent between May and June — a possible sign some buyers who had put off buying a home are making the jump now that demand is cooling off, the report indicates.

While the 2.9 percent drop is significant, experts don’t expect a rental market crash due to an extreme shortage of housing units.

“A 2.9 percent decline in median two-bedroom rent is the most significant drop we’ve seen since pre-pandemic times,” Zumper CEO  Anthemos Georgiades said in a statement. “But as the housing market begins to cool, don’t expect a rental market crash. We’re still facing a housing shortage and the labor market remains robust, so we anticipate a leveling off of rent prices, but not a freefall.”

The report also found that cities that had become the poster children of post-pandemic exorbitant rent increases are starting to cool modestly, with Miami — where rents have risen 58 percent since March 2020 — falling two spots from the third most expensive city to rent a one bedroom to the fifth.

The median rent for a one-bedroom in Miami is now $2,400 after falling 5.9 percent between May and June. Other cities in Florida are beginning to cool as well, with Tallahassee rent prices dropping 6.5 percent month over month, Fort Lauderdale falling 5.8 percent, and Tampa dipping 1.2 percent, according to the report. 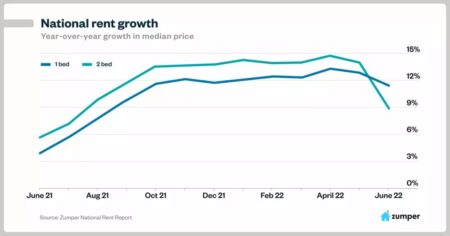 Surprisingly,  San Jose, California, rocketed up the third most expensive city in the company, behind only San Francisco and New York. It’s likely that more tech employers calling their employees back to the office has put a premium on housing units in the Southern California city, the report notes.

How To Make The Most Of Your Time...