The Big iBuyers Are Getting Brutalized In The Stock Market

After a long period of steady share price declines, the three big iBuyers — Offerpad, Opendoor and Redfin — on Friday all hit an inauspicious milestone: Their stocks fell to all-time lows.

The share price drops came amid a worsening housing landscape, with prices growing ever softer and mortgage rates ever higher and as the broader stock market has tanked. Real estate company shares generally have taken it on the nose during these tumultuous times — shares in Compass, eXp World Holdings and Anywhere are all way down too — but on Friday it was ultimately the iBuyers who set records for their worst share prices ever.

Redfin’s dip has been the most precipitous. Early last year, the company’s shares neared $100 amid booming stock and housing markets — trends which buoyed many other real estate firms’ share prices as well. But since that time, Redfin’s share price steadily fell all the way up until the end of trading Friday, when it hit $5.20.

Though Redfin’s losses over the last year-and-a-half have been the most dramatic of the iBuyers, Offerpad was arguably in the most peril Friday. After debuting on the stock market last year, the company’s share price has fallen from a high of more than $13 last September, to just $1 during trading Friday. 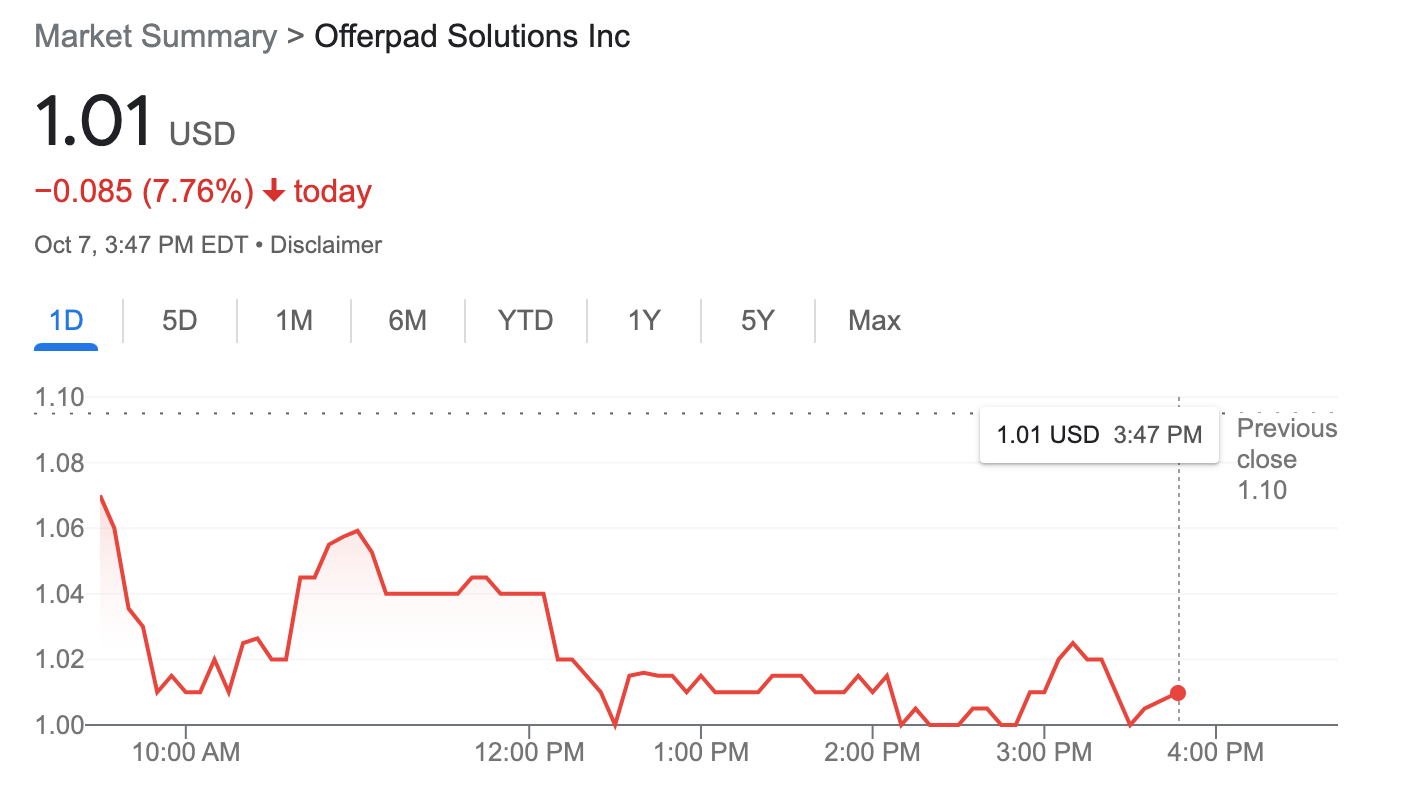 Offerpad wrapped up trading Friday with a share price of $1.01, a penny above the company’s all-time low.

The reason this is a problem is that in order to remain on the New York Stock Exchange, where Offerpad is traded, companies are required to have a share price of $1 or more. If the price dips below that threshold and stays there for a month, the company can be delisted — making it much harder to buy and sell shares and potentially warning off investors.

Offerpad’s share price is flirting with that threshold now. It hasn’t fallen below yet and even if it does the company would still have 29 days to turn things around. But the ongoing downward trajectory has been happening for more than a year, which foreshadows more potential hard times in the future.

Finally, there’s Opendoor, which went public in December 2020. Like Redfin, Opendoor benefited from the run-up in real estate company share prices that took place in early 2021. At the peak, Opendoor was getting more than $34 per share. But since that time the iBuyer has also experienced an overall downward trend until its share price hit just $2.74 on Friday. 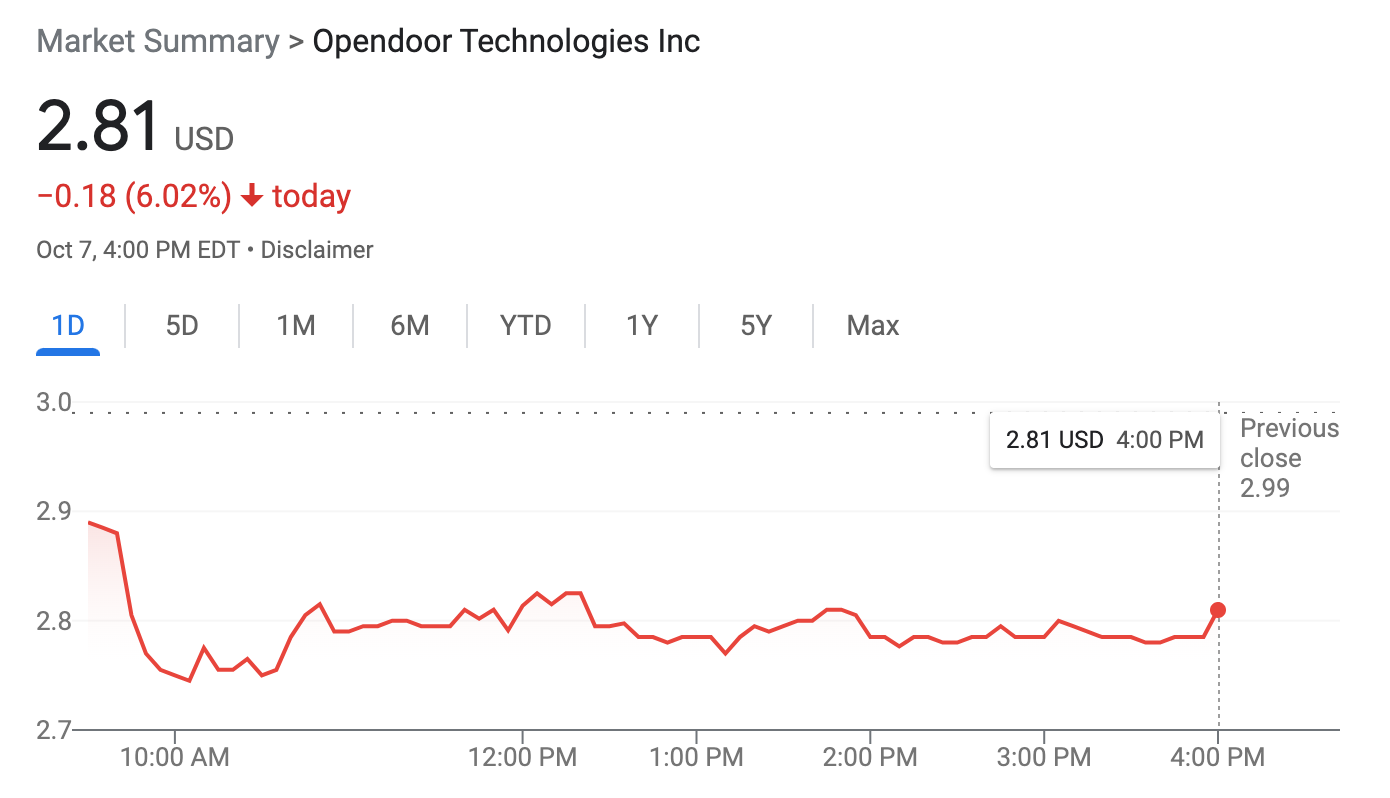 By the end of trading Friday, Opendoor’s share price came to rest at $2.81, a modest improvement from the all-time low earlier in the day.

To be clear, a big part of what’s going on is that the markets generally are down. And the share price graphs for other real estate companies such as Compass look similar with months of downward movement — though Compass has rebounded slightly from its own all-time low share price in late September while the iBuyers have not.

But investors may be looking with extra skepticism at the iBuyers. In a conversation with Inman Friday, real estate veteran Russ Cofano — currently CEO of marketing startup Collabra — pointed out to Inman that Opendoor and Offerpad both got their starts during a time when home prices were consistently going up and interest rates were low. But now rates are higher, and “we’re seeing forecasts saying prices are going to go down, in some places significantly, along with there being fewer transactions.”

“If the investor community is not yet convinced that the iBuyer model can work in a price decelerating market, then you’re going to have impact on investors,” Cofano pointed out.

In other words, investors may be wondering right now if iBuying is here to stay.

This was a question that came up previously when Zillow — once the second largest iBuyer after Opendoor — announced it would bow out of the sector, a process that just barely wrapped up. The other iBuyers all said at the time that their business was strong and that Zillow’s stumble was unique to its own version of iBuying. And indeed, Opendoor later went on to notch its first profitable quarter ever. Offerpad has had three straight quarters of profitability — a fact that perhaps seems lost on investors.

Still, the iBuyers’ earnings reports are backward-looking, which means they represent performance at a time when the market was not as rough as it has currently become. Meanwhile, investors’ potential questions about the iBuying model are forward-looking.

“That is the issue right now, can the iBuyer business model be successful in a rapidly price declining market?” Cofano said. “We have not experienced that, and that creates uncertainly.”

Redfin gets grouped in here because its stock has suffered along with that of Opendoor and Offerpad and because it too is an iBuyer. But the company also has a much more diversified business model.

“Redfin is an iBuyer and a brokerage company and a mortgage company,” Cofano noted. “So they have sort of the trifecta of uncertainty right now. More than anybody because their business model touches on all three of these things.”

Cofano also noted that Redfin’s salary model for agents means it faces fixed expenses even when transactions are down. That’s not the case for traditional commission-only brokerages.

“In the traditional brokerage model, if you don’t have sales you have no revenue, but you don’t have costs either,” Cofano pointed out, speaking of personnel expenditures.

None of this means that Redfin, along with Opendoor and Offerpad are doomed. Cofano, for instance, spoke positively about Redfin’s user experience. And the public won’t know how any of these companies have faired in recent months until the next round of earnings reports in November.

Redfin, Opendoor and Offerpad all declined to speak to Inman Friday about their stock market performances.

But there are consequences for companies that lose a lot of value. Besides the specter of delisting from the stock market, Cofano pointed out that any company with a consistently sagging stock price starts to become a cheaper and easier target for private equity firms or even hostile takeovers. Whether such a future awaits any major companies in real estate remains to be seen.

But Cofano ultimately thinks there may be more market pain ahead.

“I don’t think we’ve seen the bottom yet,” he concluded. “I think we’re going to continue to have downward pressure on the entire industry. And since we haven’t seen the bottom, it’s impossible to tell the implications of downward stock prices.”

How NYC landlords continue to use a rent...