Home Agent Pacaso: What It Is And How Agents Can Use The Second-Home Platform
Agent

Pacaso: What It Is And How Agents Can Use The Second-Home Platform

For agents looking to earn commissions by selling luxury homes to high-end clients, Pacaso says it just made things easier.

The company that has emerged as a leader in the fractional home ownership segment of real estate, says its time has come. Whether the market is up or down, whether inventory is at historic lows or closer to normal, the company says it’s poised to continue its rapid expansion.

And that gives agents another source of potential revenue no matter where they are, Pacaso representatives say.

“You could be an agent in middle of nowhere Ohio and you could help your client buy a co-owned home in Cabo,” said Chrissy Bruchey, consumer communications manager at Pacaso. “Agents are so focused on their market and being the king of their specific region. That’s great, but in a market like this the opportunity to earn outside of just your little bubble is probably something you should take a look at.”

The San Francisco-based company says it’s providing more options for agents across the country to earn ongoing revenue simply by referring clients to the company.

Pacaso handles most of the work around closing the transaction, leaving agents with a low-touch way to earn commissions on the sale of each share.

The company specializes in fractionalizing luxury homes in popular vacation destinations, taking one home and giving up to eight buyers a chance to become owners.

In recent weeks, Pacaso has added new features to make it easy for agents to make and track client referrals and generally become affiliated with Pacaso as a way to generate sales despite headwinds.

Here’s an in-depth look at luxury co-ownership of real estate, specifics on Pacaso’s model and how agents can benefit.

First, what is co-ownership?

Co-ownership arrangements became popular in the 1980s and 90s. Pacaso and its competitors represent a modern version of arrangements that had historically been made between family members or friends.

But rather than splitting up the time shared at a vacation home, the cost to buy it and the labor to maintain it, Pacaso acquires homes, converts them to limited liability companies and sells them off in one-eighth shares to buyers. 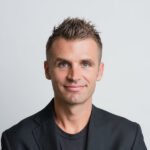 Rather than fractionalizing a home among dozens of investors — a different segment of the co-ownership market — Pacaso relies on exclusivity as a selling point.

“I feel we’re in the early days of an exciting new category being formed around second home ownership,” Pacaso CEO Austin Allison told Inman in a recent conversation. “It turns out that when you buy a second home, or a primary home, you’re not just buying a piece of real estate, you’re buying a second community, a second group of friends, a second life, in a way.”

Buyers can acquire up to four of the eight shares, which each gives them access to six weeks of access at the home. (The company says that’s about how much time people spend at second homes even when they’re the sole owner.)

After the eight shares are sold, Pacaso no longer retains ownership. It then shifts into a property management role for the home, facilitating scheduling between owners, cleaning and maintenance.

Before selling the shares, Pacaso marks up the cost of the home by 12 percent, Bruchey said, to cover the costs of designing the home and for the company. It then sells the eight shares.

Owners must hold onto a share for at least a year. When they want to sell, the other co-owners get five days for the first right of refusal to buy it. If the existing owners decline, Pacaso works with the seller to facilitate the sale to a new owner. 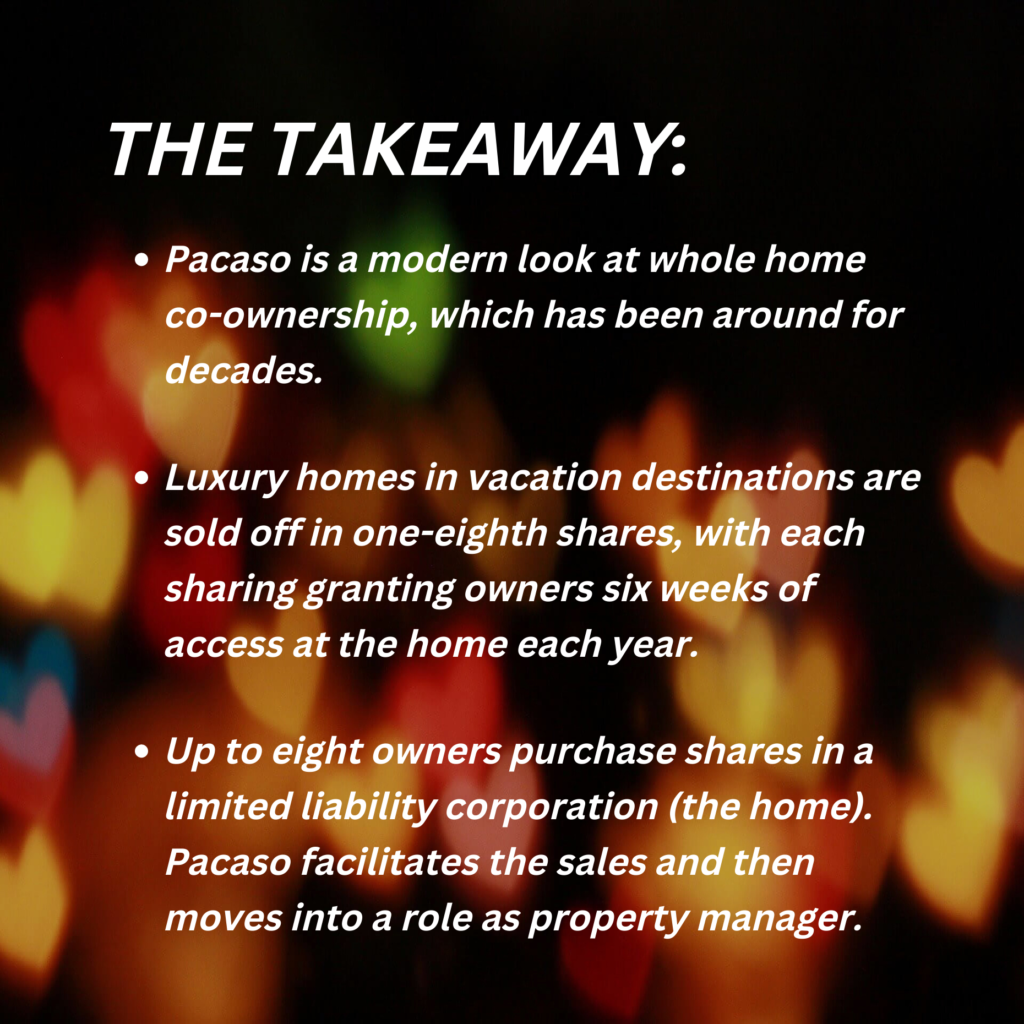 How to work with Pacaso

This month, Pacaso unveiled a new feature to help agents track their referrals through the transaction process.

The dashboard allows agents to create an account with Pacaso where their referrals and commissions are tracked over the life of the client’s relationship with the home.

Agents who refer a client that buys a share in a Pacaso earn a 3 percent commission on the initial sale, plus 500 restricted stock units in the private company. They then earn 1 percent on shares that are sold, whether that’s a year later or years down the line.

“You bring us the buyer and we really do everything,” Bruchey said. “The tours, all the paperwork, the closing. And you get the commission.”

Agents are welcome to attend showings in addition to advising their clients through the process. But they aren’t required to do so.

Pacaso handles the tours, inspections, escrow and closings and agents can track each process through the dashboard.

“Our sales team takes over the transaction. They know best what is in our inventory and can showcase to those clients,” Bruchey said. “We are just the middleman in closing the deal.”

The company has created a series of tutorials and marketing materials for agents who are interested in attaching Pacaso to their personal brands.

That includes an agent playbook complete with draft emails agents can send to clients in their databases, examples of blog posts and an agent referral agreement.

It also recommends sharing examples of Pacaso homes on social media and tagging the company, and it provides examples of captions.

“Agents always ask us what’s the catch?” Bruchey said. “Honestly, there isn’t much.”

Agents are often paid within a few days after a sale. They can then use the dashboard to see if a client has sold a share down the line, or if a client buys more shares in a Pacaso.

“That’s a life cycle of money,” Bruchey said. “Say John originally buys an eighth. Say he then buys a fourth. You get that commission as well…You get 3 percent on every share price.”

With the price of homes inflated by a run-up in prices and a spike in mortgage rates, real estate professionals have been watching for the rise in fractional ownership. 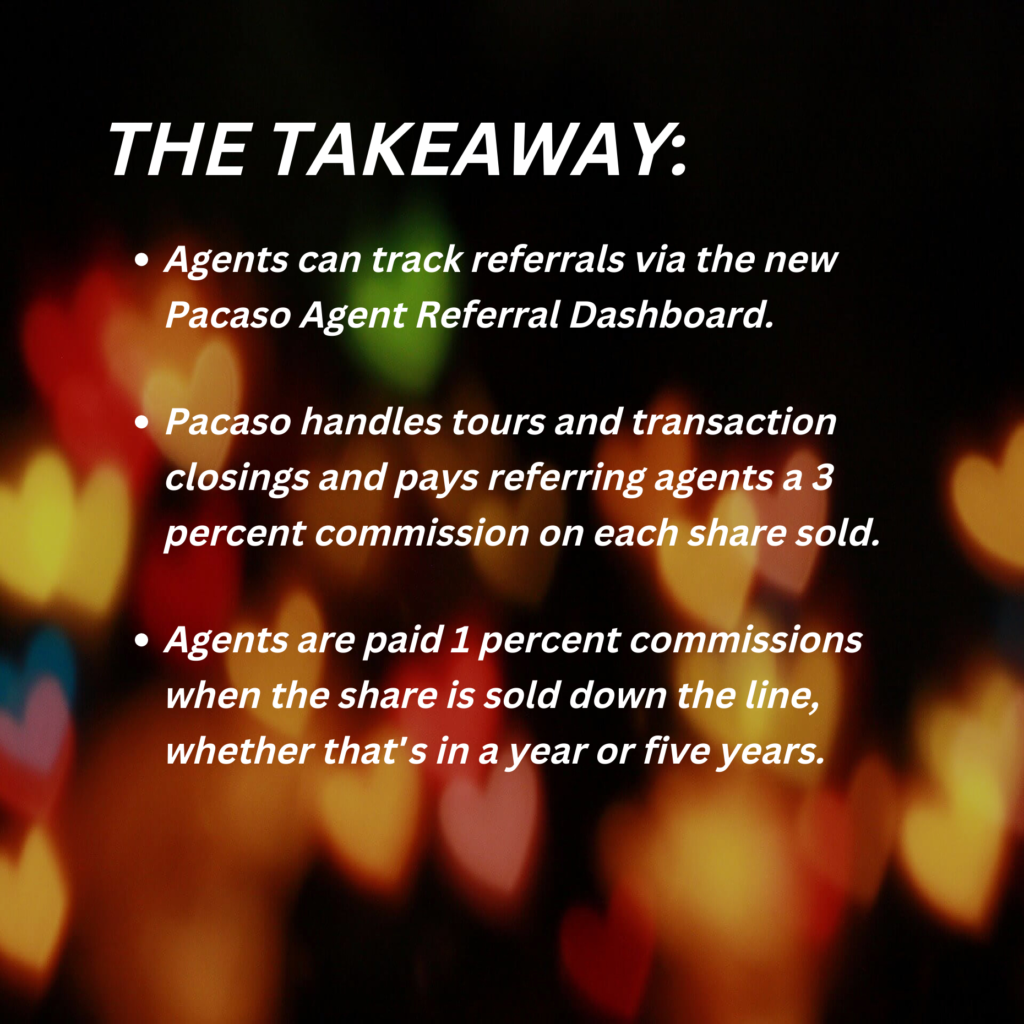 Where is this inventory coming from?

Pacaso says its model is adding inventory in markets with short supply.

While it has come up in recent months, national inventory of homes for sale remains well below historical numbers. But this is one way agents and brokers might be able to work with Pacaso.

While the firm targets luxury vacation markets, it will occasionally work with agents and brokers who think they’ve found a home that would work for Pacaso clients. 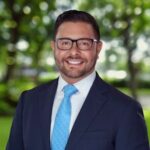 “Not only have I represented them on the listing side, I’ve uncovered inventory for them,” said Josh Dotoli, principal at Dotoli Group in Fort Lauderdale, Florida. “Whether off market or builder inventory, I’ve brought them multiple deals and they’ve acquired them.”

Pacaso will also consider buying part or all of a home from an owner who, for whatever reason, doesn’t want to own the full house anymore.

They would then pay the $99 monthly management fee per share to Pacaso and receive the benefits of access to a home that’s managed by Pacaso.

In Pacaso’s earliest days, real estate teams were struggling to find inventory for their clients who would then be competing with an already inflated pool of investors.

But some teams say they welcomed the company in its markets, rather than viewing it as a new competitor for scant inventory.

“I wanted them to get into Colorado — I helped them get in,” said Lane Hornung, founder of 8z Real Estate in Denver and Boulder and CEO of the company zavvie, which provides buying and selling technology solutions to real estate brokerages.

Part of it, he said, was self-interest.

“I wanted to be an owner,” he said in a call a day after leaving his Pacaso home in the old mountain town of Telluride. 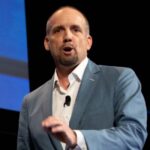 With a place in Manhattan Beach, California, and a yacht in the British Virgin Islands, Hornung said he and his family were interested in buying a portion of another vacation home, rather than the whole thing.

But as a leader at his brokerage, Hornung viewed the model as a way for agents on his team to generate more sales.

“When you fractionalize a $10 million property, it’s a lot easier to sell a one-eighth share than the whole enchilada,” he said. “It’s a much broader market for an eighth than the full ticket.” 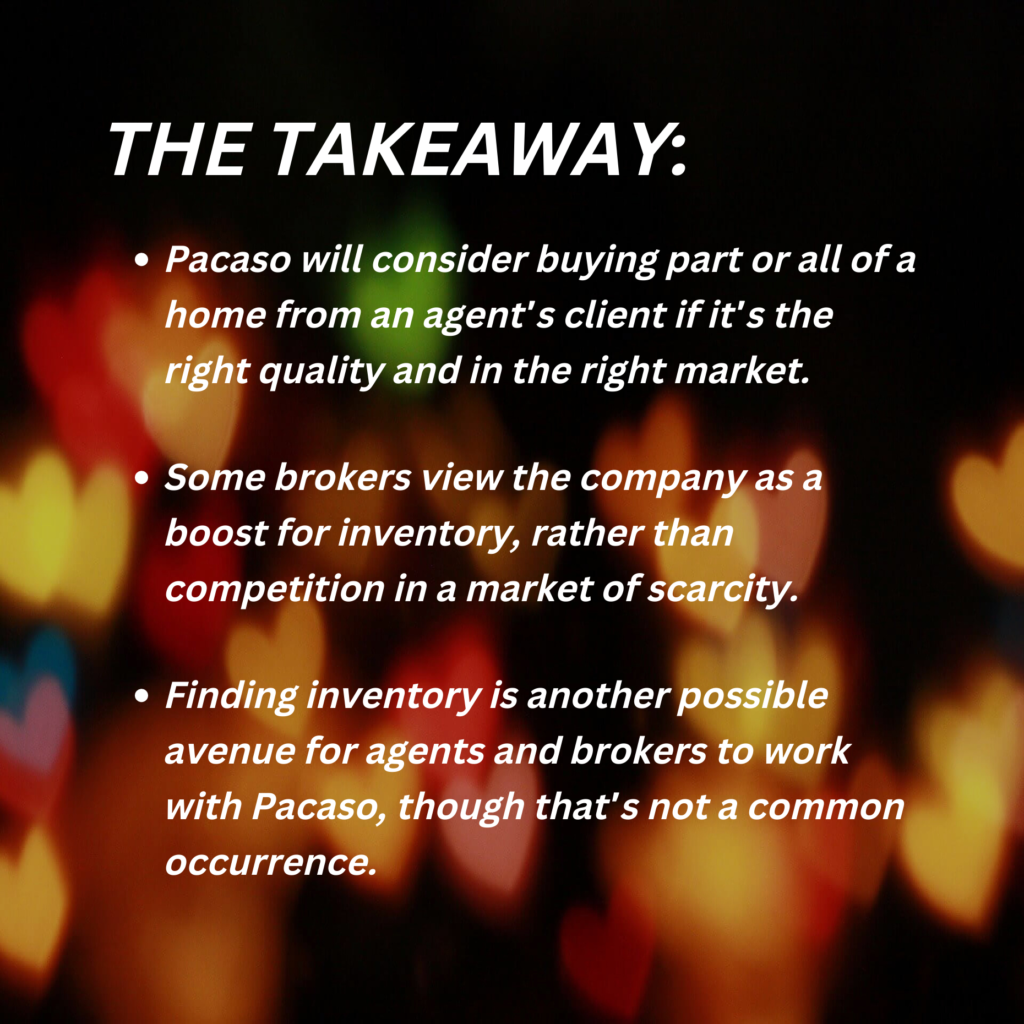 There is frequently chatter online about whether Pacaso and other fractional second home ownership companies are simply offering timeshares with modern branding.

The company also faces pushback in some markets including a Santa Barbara campaign that’s fighting to stop Pacaso from moving in. The campaign is called “Stop Pacaso Now.”

In Palm Springs, the California desert city’s attorney said in a legal opinion earlier this year that the homes are timeshares. Timeshares aren’t allowed in many zoning districts of Palm Springs.

“Despite Pacaso’s assertions to the contrary, the City Attorney believes that Pacaso’s business model meets the City’s definition of a ‘timeshare,’” Jeffrey Ballinger, the city attorney, wrote in an opinion in March.

Park City, Utah, a popular vacation market, is in the process of deciding whether to regulate Pacaso homes effectively as timeshares.

The company maintains its model is unique from a timeshare. It points to the fact that timeshares are often in condos or hotels at resorts, whereas Pacaso homes are luxury, single-family homes with fewer owners than traditional timeshares.

“Because of these two characteristics, the Pacaso model would not be considered a timeshare by most people,” said Andy Sirkin, a California attorney who specializes in co-ownership. “But many timeshare laws were written years before Pacaso existed, and some of these laws define ‘timeshare’ so broadly that Pacaso homes are accidentally covered even though the laws were intended to regulate multi-unit resorts with hundreds of owners.”

The company recommends agents, who face questions from clients about the difference between a Pacaso and a timeshare, highlight the homes’ exclusivity and small group of co-owners.

Pacaso also frequently highlights the fact that it doesn’t allow owners to rent their shares out via nightly rental platforms, which can be a selling point for agents.

“I love the fact that you’re not able to rent it out,” Dotoli said. “The people that are staying there have a sense of ownership and they treat it like it’s their own property, not like a rental.”

In contrast, Ember, the Utah-based Pacaso competitor, recently moved to give homebuyers the opportunity to rent their homes out on short-term rental platforms like Airbnb and Vrbo.

They say that makes reselling timeshares difficult since multiple units that look alike can be for sale at the same time. Pacaso homes, the company says, are unique from one another.

In contrast, Pacaso’s Bruchey says owners have typically earned a 12 percent premium and shares resell within two weeks. Agent commissions are paid out within a week, Bruchey said. 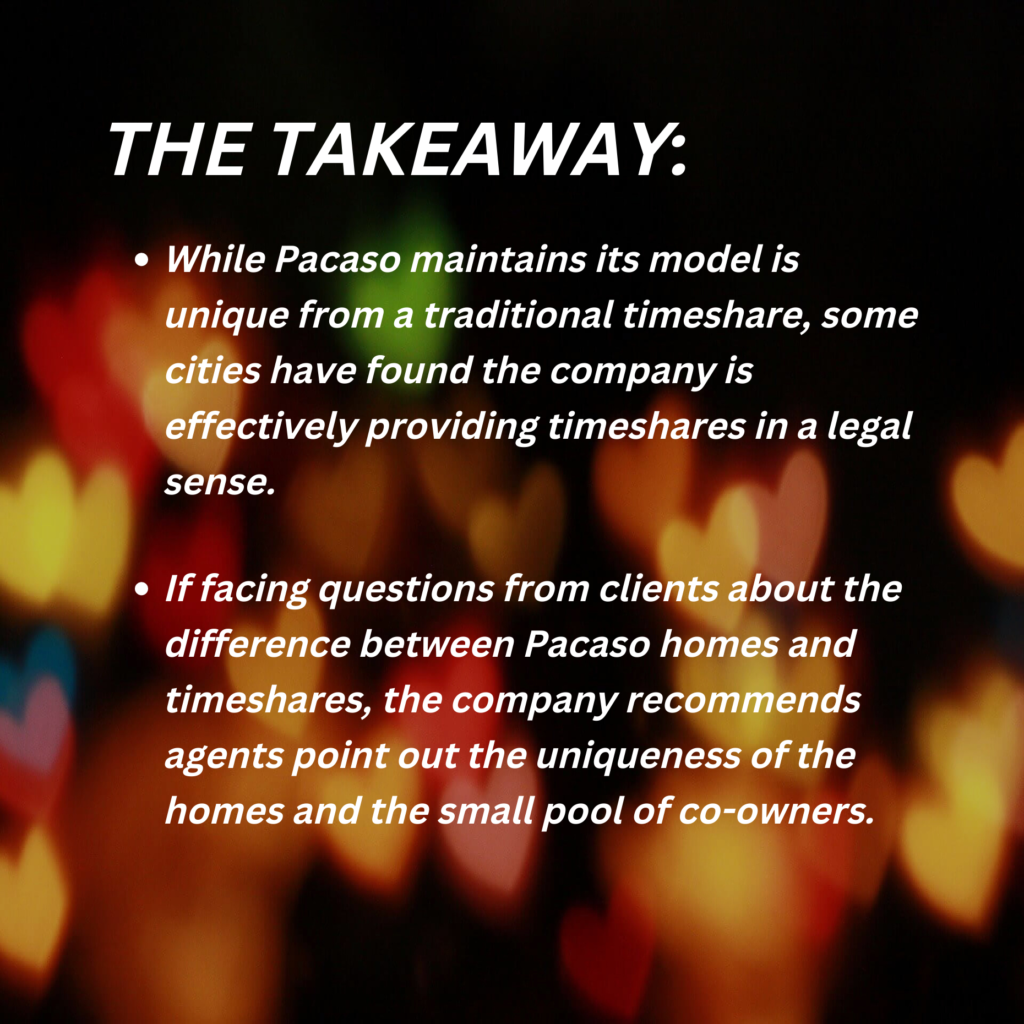 The future of Pacaso

Timeshare or not, Pacaso has been making waves in its space: The company rapidly reached a valuation of $1.5 billion shortly after launching. 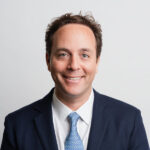 The company was co-founded by Spencer Rascoff, the serial entrepreneur who also helped start Zillow in 2005.

Despite its rapid growth and the recent market downturn, Rascoff shared one insight into where the company is right now: Pacaso isn’t going anywhere.

With interest rates up, homebuyers turn to adjustable-rate...