Everyone wants a piece of the housing market, and California-based Pacaso has invested nearly two years helping second-home buyers claim their slice through its co-ownership model.

Despite success among luxury buyers and reaching a $1 billion valuation over a record-breaking six months, the platform has also faced backlash for selling median-priced — albeit still expensive — homes to what locals describe as “transients” at a time when primary homebuyers are scrambling for listings.

On Wednesday, however, Pacaso responded to that backlash, claiming, among other achievements, a small victory for its decision in June to streamline its buy-box in some markets to reduce competition among buyers for median-priced homes, according to the company’s first-ever economic impact report.

“Our study found that Pacaso’s unique approach to housing co-ownership provides multiple benefits for the communities it operates in,” said Glen Weisbrod, chair of the board of directors at EBP, which conducted the research. “This includes additional household spending going to local stores and services as well as additional tax revenue, compared with other second homes.

“We also concluded that in all likelihood, by consolidating multiple owners into luxury homes, Pacaso is providing a new option to second homeowners without disrupting local housing markets,” he added. 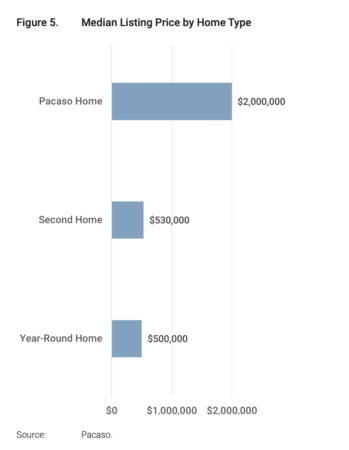 Pacaso didn’t provide data on its other destinations and noted EBP relied on “assumptions based on industry and public record data” to produce insights since the platform is in its growth phase. “As Pacaso expands, its effect will likely become clearer, and we encourage future research to this end,” the report explained.

“At a time when housing affordability is a real concern to many families up and down the country, EBP’s research shows how Pacaso helps reduce competition for primary homes,” the report stated, while noting co-ownership enables eight buyers to pool their resources into one home instead of eight.

“As a result, the company is unlikely to compete with middle-class or lower-income homebuyers in the five markets EBP studied,” it added. “In other words, Pacaso isn’t in the business of buying or competing for single-family homes or even typical second homes.”

Although creating communities of “transient” neighbors is a primary sticking point for Pacaso’s detractors, the platform said the ability to have a rotating schedule of eight owners, who must follow a stringent code of conduct, provides more value to communities than one owner who spends a month at their second home per year.

The highest level of spending comes from Pacaso homes in the Bay Area, where a household of eight Pacaso homeowners collectively spends an estimated $72,240 per year at local businesses. Pacaso households in the Colorado mountains have the second-highest level of annual spending at $54,610, followed by households in New York City ($53,850), Palm Springs ($44,090) and South Florida ($41,450).

“In Colorado, for example, the average second home contributes $4,960 in local spending per year,” the report read. “By contrast, a typical Pacaso home that is occupied almost all year spends $54,610 in Colorado mountain communities like Telluride or Aspen – more than 10 times as much.”

It added, “In practice, that means money spent at ski resorts, local ice rinks or in the local movie theater. People staying in their second homes year-round means more income for local businesses.”

Finally, Pacaso said its owners contribute more local and state tax revenue than a “typical second-home owner.” In the Bay Area, which includes Napa and Sonoma, the average Pacaso home generates an additional $3,710 in state taxes and an additional $1,580 in local sales taxes compared to a typical second home.

“These results reinforce the problem with second homes today and how Pacaso’s co-ownership model can help,” Pacaso co-founder and CEO Austin Allison said in a statement. “The average second home sits empty for 10 months out of the year, which is a wasteful use of single-family homes in destination communities.

“Through co-ownership, Pacaso concentrates demand into fewer high-end homes and, because the homes are occupied 11 months out of the year, the owners spend more at local businesses,” he added.

America has entered a housing recession, builders and...