NYC Real Estate Commissions Are All Over The Map: Consumer Watchdog

There are big differences in real estate commission rates and agent compensation throughout New York City, depending on the rules of the multiple listing service in which a property is listed, according to a new report from nonprofit consumer watchdog the Consumer Federation of America.

The New York City real estate market doesn’t have one dominant MLS whereas other markets typically do and that MLS is almost always Realtor-affiliated.

“It astonished us to learn that there were such large differences in agent rates and commissions throughout New York City,” said Stephen Brobeck, a CFA senior fellow and the report’s author, in a statement.

According to CFA, its latest report shows that real estate agents and brokers can still make money even when commission rates are lower than what is typical in most markets.

“[T]he Brooklyn MLS, and to a lesser extent, the OneKey MLS in nearby communities, has shown that agents and brokers can sell residential properties profitably with commission rates much lower than the 5-6 percent rates prevailing in most local U.S. housing markets,” the report said.

“In the New York City area, while housing prices are relatively high, they are lowest in many communities with the lowest commission rates. Moreover, commission rates are also high in many other areas of the country where home prices are high.”

CFA’s latest report concludes that the most important reason for commission rate differences in the New York City area was the MLS through which the sale was made, specifically, that MLS’s rules.

According to CFA, REBNY’s RLS requires listing brokers to offer and provide buyer brokers with the same amount of compensation they are receiving — in other words, split the total commission equally — and has established a norm of 5 to 6 percent total commissions.

Meanwhile, at Brooklyn MLS listing brokers are not required to offer any compensation to buyer brokers and 10 percent of the listings in the study’s sample chose not to. There, most total commission rates added up to 3 or 4 percent with a rising number of 2 percent rates, particularly if the listing agent double-ended the deal by working with both the buyer and the seller.

And OneKeyMLS, which is affiliated with the National Association of Realtors, does not require that buyer agent compensation equal that of the listing agent, but does have a NAR rule that requires listing brokers to offer a blanket, unilateral offer of compensation to buyer brokers in order to submit a listing. Multiple federal antitrust suits are currently attacking this rule, which the CFA has condemned in multiple reports. 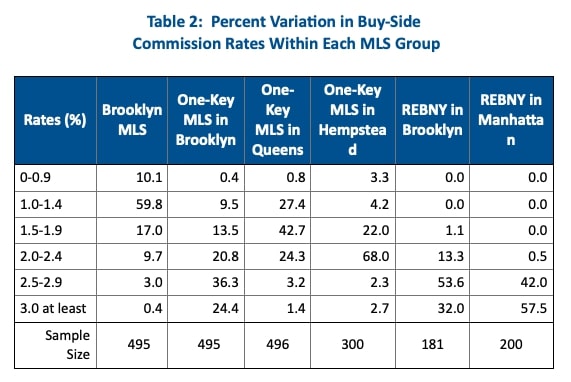 In the report, CFA reiterated its call for an outright ban on sellers offering buyer broker commissions.

“The New York City residential real estate market shows that some rate competition among brokers and agents is possible,” the report said.

“Uncoupling rates would likely stimulate not only greater rate competition, but also needed experimentation with different rate and service models.”

The watchdog urged NYC consumers, especially those served by REBNY, to insist on lower commission rates.

“In most instances, those selling homes in Manhattan are being ripped off by high commission rates,” Brobeck said. “On the sale of a $1 million condo, agents rarely deserve $60,000 in compensation, the price of two new economy cars or one expensive one.” 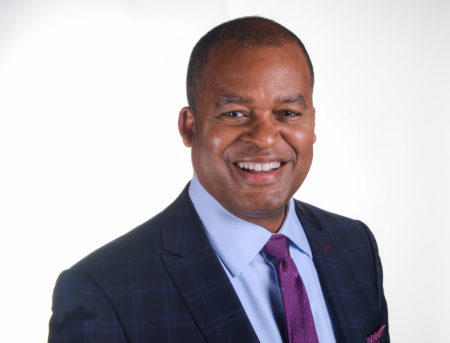 Asked for comment on CFA’s report, NAR spokesperson Mantill Williams told Inman, “The free market organically establishes compensation costs within local real estate markets based on competition, service, consumer preference, and what the market can bear, among other things.”

Without Compass sales, the median buy-side commission rate for OneKey in Brooklyn fell from 2.5 percent to 1.5 percent.

“It appears that Brooklyn MLS rates have put downward pressure on all commission rates in New York City except those charged on REBNY sales,” Brobeck said.

From this, CFA concluded that just one MLS with low commissions in one market can drive down commission rates in other MLSs operating in the same or nearby markets.

“This pressure on rates may reflect consumer awareness that some local commission rates are low,” the report said.

“It may also reflect the practice of some agents, used to offering low buy-side rates in one MLS, to also offer low rates in another MLS.

“And it may reflect the awareness of other listing agents that, in a business highly dependent on agent cooperation, rate competition is a viable alternative to rigid industry rate norms.”

By contrast, an earlier CFA study found that double-dipping by individual agents in 12 cities ranged from 3 percent to 15 percent, averaging 9.4 percent.

“Most agents selling property through the Brooklyn MLS not only offer low buy-side rates but also work hard to find buyers themselves,” Brobeck said.

“They often withhold or delay listing on the MLS or make it difficult for buyer agents to sell the property by, for example, limiting communications.”

According to CFA, listing agents typically work with buyers as customers, not clients, in New York State when double-ending a deal because the state discourages dual agency.

“Unless buyers hire an attorney, most are unrepresented in double-ended sales,” Brobeck said.

However, CFA concluded that more frequent double-ending was likely a result, not a cause, of low commission rates.

“In New York State, this double-ending costs buyers fiduciary representation since they are usually treated as customers, not clients, by listing agents.

“In other areas of the country where dual agency is widely practiced, costs are borne mainly by sellers who lose fiduciary representation. Listing agents acting as dual agents can no longer legally provide advice or assistance to sellers that would disadvantage buyers.”

“Most of this report seeks to explain differences in typical rates, and the dispersion of these rates, within the six NYC-area MLS groups,” the report said.

“Because of limited data and methods of analysis, the exploration of causes is more suggestive than definitive though there is strong evidence for the influence of some factors.”

The report is based on data provided to the watchdog by discount broker and consultant Derek Eisenberg. The data includes sales that took place through Brooklyn MLS and OneKey MLS, mostly in the late spring and early summer of 2022, and listings — not sales — through REBNY collected during the fall of 2021. Brobeck told Inman Eisenberg was unable to obtain sold data from REBNY.

MLSs typically do not include data on sell-side commissions. Asked how CFA was able to obtain data on total commissions, Brobeck said, “Last year, when trying to figure out the Brooklyn data, I talked to several NYC area Realtors. All said NYC total rates are usually 3-4 percent.

“That’s also true outside the Brooklyn MLS, so when typical buy-side rates are 1.5% in OneKey Brooklyn (excluding Compass) or OneKeyQueens, the typical rate is 4%.

“But in Manhattan, there was agreement that the typical rate was 6 percent. This is supported by my data (median buy-side rate of 3 percent) and REBNY’s Universal Co-brokerage Agreement, which sets the norm of equal buy-side and listing agent rates.”

Editor’s note: This story has been updated with additional comments from CFA’s Stephen Brobeck.

Homeowners Gained $3.8T In Equity Over The Past...

What Does It Mean When Even The Wealthiest...

Kim Kardashian buys $6.3M home in between her...