Moody’s Says Odds Of Recession Have Risen To ‘Uncomfortably High’ 59.5%

Mortgage rates will stay at current levels well into the spring homebuying season, which means a “darker outlook for home sales, homebuilding and house prices,” Moody’s Analytics Chief Economist Mark Zandi said in a series of tweets over the weekend, echoing a growing chorus of forecasts that suggest a recession may be unavoidable.

Zandi said that although a previous forecast that mortgage rates would average around 5.5 percent through the spring selling season “seemed way high” at the time, but “now seems way low.”

“Fixed rates are currently near 6.5 percent, more than double what they were a year ago when they were hovering near a record low,” Zandi noted. “This has been a massive blow to affordability and the housing market.”

The veteran economist said he now thinks it’s likely that mortgage rates will stay elevated at 6.5 percent or higher this spring.

In their latest weekly market outlook, economists at Moody’s Analytics said they now put the odds of a recession at an “uncomfortably high” 59.5 percent.

“Contrary to popular belief, consumers are not the first to run to the bunker, pushing the economy into recession. Rather, the first to turn is housing, then business investment, followed by consumer spending,” Moody’s warned.

That’s because interest rates are usually headed up at the end of an economic boom, and “housing is extremely interest-rate sensitive.”

Ironically, a key factor driving rates higher is that investors who fund most mortgages are demanding an unusually high premium in comparison to comparable government bonds, out of fears that the home loans they make now could quickly be refinanced if rates drop.

What’s confounded Zandi and other forecasters is not just the ferocious pace of Fed rate hikes — “I had expected that,” he tweeted — but the growing “spread” between 10-year Treasury yields and mortgage rates.

My forecast error is not because Treasury rates are up, I had expected that, but because of an extraordinarily wide difference between the mortgage and Treasury rates. This spread is the compensation that investors and lenders who fund, originate, and service mortgages require.

Conforming mortgages backed by Fannie Mae and Freddie Mac are securitized and sold to investors, who consider them nearly as safe a bet as U.S. government debt. Because 10-year Treasurys have a similar repayment term as mortgages (most homeowners refinance or sell their home before paying off their mortgage), yields on 10-year notes are considered a good barometer of where mortgage rates are headed next. 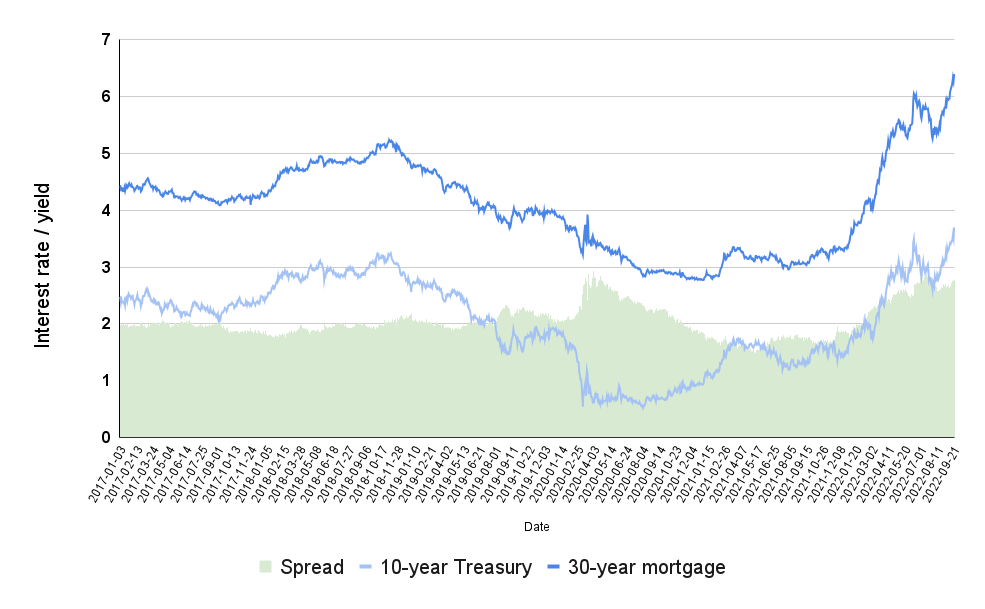 The “spread,” or difference between 10-year yields and 30-year mortgage rates, reflects the additional premium investors expect for taking on the additional risk involved in mortgage lending.

Going back to 2017, the spread between 10-year Treasurys yields and 30-year fixed-rate mortgages has averaged about 2.05 percentage points.

The spread between 10-year Treasury yields and mortgage rates has been growing since then, and is almost as wide as it was at the outset of the pandemic.
Although delinquencies and defaults on home loans are still low by historical standards, investors in mortgage-backed securities are worried about something else: prepayment risk.

If the Fed’s efforts to combat inflation lead to a recession, interest rates are likely to come back down, giving many homeowners taking out loans today the opportunity to refinance at a lower rate.

Zandi estimates that the spread is four “standard deviations larger than typical,” largely because big swings in rates increase the prepayment risk borne by investors.

“Rate volatility won’t normalize, and thus the spread narrow and rates fall until the Fed is done hiking rates,” Zandi predicted. “But that’s not for a while.”

In their latest forecast, Fannie Mae economists abandoned previous projections for a dramatic retrenchment in rates next year.

Rates not expected to ease

But in their September forecast, Fannie Mae economists warn that the Fed is still trying to get inflation under control. Even with a potential recession on the horizon, forecasters at the mortgage giant see rates peaking at 5.7 percent, and coming down only slightly to 5.5 percent by the end of next year.

The six-month centered average of new home sales is down 19.6 percent from a year ago, and “odds favor further weakening as mortgage rates will likely continue to increase.”

The current pandemic-driven business cycle is “unlike any other … so it is important not to rely on a single warning of a recession. But declines in housing activity may be an ominous sign,” Moody’s Analysts concluded.

Why falling home prices aren’t much help to...

What’s In Store For The Housing Market In...