The “Selling Sunset” spinoff brings a new cast of agents and a new office into the mix — this time at Oppenheim’s recently opened Newport Beach brokerage location.

As tends to be the case with reality TV shows, there’s plenty of drama, but also fast and loyal friendships, seasoned agents giving newer ones tips for learning the ropes, and some gorgeous multi-million dollar properties.

For those who haven’t tuned in to the series yet, here’s a rundown of who’s who, as well as some fun facts you won’t learn from watching the show.

Prior to launching her real estate career, Alex Hall worked in interior design, and her eye for design detail becomes especially apparent during an episode in which she and Kayla Cardona are working on staging their co-listing.

Hall, who grew up in Orange County, isn’t afraid to be open about her hustle as the single mom of two school-aged kids, and her struggle to find the time to be a successful working mother and have a dating life. She may stir up the pot a bit on the series, but her status as a confident negotiator is clear when it comes down to business.

Fun fact: Hall originally said no to being on “Selling the OC,” People reported, but was convinced to reconsider when she learned that the show would have one of the same producers from the reality TV show “Laguna Beach,” of which she’s a fan. Jason Oppenheim also gave her a two-hour pep talk over the phone, telling her she’d be a fool not to do the show. 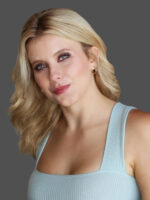 In reality TV shows, there’s always a villain archetype that emerges quickly in the series, and unfortunately for her, Alexandra Rose takes up this role on “Selling the OC.”

However, Rose also reveals her worth to the brokerage by handily winning and ultimately selling with her partner Jarvis what Oppenheim calls “double-digit listings,” or properties that can be listed at a price of eight figures. Rose is still a relatively new agent to the business, but has already closed about $100 million in her first four years as an agent.

The show’s viewers also learn later in the season that Rose’s sometimes hard exterior may be a result of her tumultuous childhood, living with parents who were incapable of caring for her and her siblings, and ultimately being adopted. By the end of the series, some viewers might find themselves wondering who the true bullies on the show are — Rose and Jarvis, or the show’s other female agents?

Fun fact: Alexandra Rose and Alexandra Jarvis were not originally chosen to be on “Selling the OC,” but were subsequently added to the show, which may be where part of the drama originates between them and the show’s other female agents. 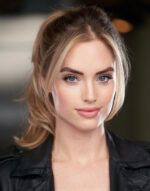 Jarvis became known as Rose’s right-hand woman from the get-go, with the two pairing off as team and forging a powerful alliance that was often pitted against other women in the office. Unlike many of the office’s other agents, Jarvis is a California transplant, having grown up in Alabama.

After attending and graduating from law school at UC Irvine, Jarvis was a practicing attorney at a litigation firm in Newport Beach. Only recently did she launch her real estate career, but is already well on her way to finding success, having closed nearly $40 million during her first year in the industry.

Fun fact: Jarvis is a ballroom dancer and specializes in West Coast Swing. 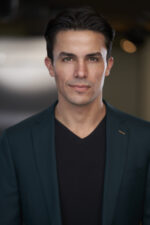 Having grown up in a real estate family (his mother, Lisa Helou, has been in the industry for over four decades and his father, Carl Helou, is a builder), Gio Helou naturally found his way to the industry after studying film as an undergraduate. First he worked in new development, and then made his way to luxury real estate, cutting his teeth at big names like Coldwell Banker and Engel & Völkers before joining The Oppenheim Group.

Gio seems to be riding on the waves of his own self-confidence at times on “Selling the OC,” but that big ego — which he makes no effort to deny — does have some backing to it, since he belongs to an elite class of Realtors on the team who have achieved Oppenheim’s double-digit listing goals.

Fun fact: Helou pitched himself as a new agent to The Oppenheim Group based on his wife, Tiffany’s, suggestion. (She’s a fan of “Selling Sunset.”) “I had already been thinking about making a move… I was thriving in the OC real estate biz but wasn’t happy with my current office,” Helou told Inman. “I thought what the Hell, and I walked in [the office] that day and Jason happened to be there. We immediately hit it off since we were sporting the same Rolex … the rest is history.” 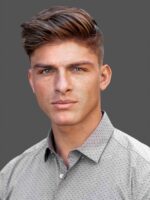 Austin Victoria is another agent relatively new to the real estate industry, having started his professional career as an international model — something he continues today. He began his real estate career in 2017, and has been affiliated with Keller Williams and Douglas Elliman.

Victoria is the clear family man of the cast, always emphasizing how he’s working for a living to support his wife and two young children. With that motivation at the forefront, he sometimes comes off as a bit more serious that the other agents, but displays a clear dedication to doing his job well.

Fun fact: Victoria’s modeling gigs have included ads and commercials for Hollister, American Eagle and Armani Exchange. He also appears on the cover of the romance novel “Pretty Reckless” by L. J. Shen. 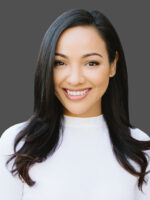 Lauren Brito is probably the least controversial agent that appears on “Selling the OC” — she’s mild-mannered, plays well with others and always seems to have a sweet smile on her face. Prior to joining The O Group or getting into real estate, she also gained practical experience learning how to operate a business by co-owning her family’s small business outside of Los Angeles.

According to her bio, one of her trusted mentors is an internationally ranked top 1 percent agent, and the level of professionalism she’s learned from him or her is very apparent.

Fun fact: By day, Lauren may love the glamorous life of luxury real estate, but she told Inman by email that when she goes home at night, she turns into a book worm. “I’m really just a book nerd at home,” she said. “I ready 85 books last year and hope to beat that this year! #glaminthestreets #bibliophileinthesheets” 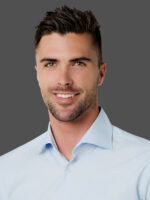 Once a professional surfer, Stanaland actually acquired his real estate license at the ripe age of 18, following in the footsteps of those who went before him in his family, and becoming a fifth-generation Realtor. After pursuing surfing for several years, he joined his family’s brokerage and became fluent in the luxury coastal markets of Orange County.

Stanaland is a true peacekeeper on the show, never making waves, and always ready for a diplomatic solution, even when one of the show’s female agents attempts to kiss him multiple times, despite his status as a married man. 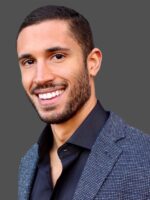 Like some of the other male agents on “Selling the OC,” Sean Palmieri tries not to get into the drama too much, but also isn’t afraid to call out behavior that he feels is inappropriate between co-workers.

Palmieri started his real estate career in Miami after finishing his undergraduate degree in advertising. Shortly thereafter, he dove into the luxury real estate space by managing the marketing of Zaha Hadid’s 1000 Museum condominium tower while at One Sotheby’s International Realty in Miami. In 2018, he made the move to Southern California, starting off in San Diego, and ultimately moving to Beverly Hills, and now Newport Beach with The Oppenheim Group.

Fun fact: Palmieri is the only unmarried male agent featured on the series, aside from Jason Oppenheim himself. 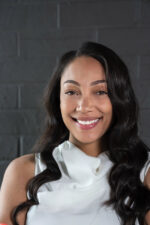 Brandi Marshall had a solid, roughly 15-year career in public relations before making the switch to real estate. She may be new to the profession, but Marshall is already working her professional and personal connections to find lucrative clients in Southern California. If an episode that reveals she’s working with Darren Collison — a retired NBA player who was with the Pacers and the Lakers — indicates anything, Marshall may very well have a career of specializing in sports and entertainment real estate ahead of her.

Marshall’s persona on the show is one in which she typically chooses to stay above the fray and focus on getting her job done well. But, she’s also ready to tell it like it is when the drama rises. Viewers learn she is married to Sean Marshall, a retired professional overseas basketball player who played with teams in places like Greece, France, Japan, Germany and Turkey, who also makes a cameo on the show. 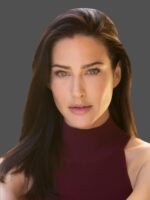 Before transitioning to real estate, Brindle was a model and worked in the fashion industry for two decades in glamorous cities like London, Paris, Milan and Barcelona. A native of Northern England, Brindle moved to the U.S. in 2011 and pursued management roles at luxury apparel and architecture firms before becoming a real estate agent.

Brindle brings a healthy dose of lighthearted energy to “Selling the OC,” and often provides a bit of comic relief. Even though she’s “literally speaking English,” as she often points out to her fellow agents, it’s not unusual for her to get ripped on because her colleagues can’t understand her British accent.

Fun fact: Brindle has a modest collection of taxidermy birds and mice, inspired by her mother who is a taxidermist. “It’s a very acquired taste, I know!” Brindle told Inman. 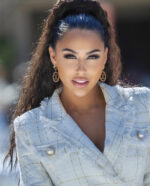 As the single mom of a teenage boy, Kayla Cardona has had her share of struggles. Before getting her real estate license in 2019, Cardona juggled multiple jobs to make ends meet, stringing together gigs like haircutting and bartending.

On the show, Cardona even reveals that to this day she works nights and weekends as a bartender while working to get her real estate business off the ground. Getting her first listing while at The Oppenheim Group is a huge deal for her, understandably, but the pressure she feels she faces also shows.

Unfortunately, Cardona becomes a bit of a surprise villain later in the season when, one night out with the team after a few drinks, she tries to kiss Tyler and is later excoriated for it by some of her fellow female agents (who, arguably, are also all over Tyler at other points in the show). She seems truly remorseful, though, and makes a commitment to not let it happen again.

Fun fact: At one point, Cardona went to pilot school in order to learn how to fly helicopters at Orange County’s John Wayne Airport.

Rent or buy in the Triangle? Study says…