Recently, HomeJab has thrust itself into the marketing datasphere, leveraging the activity of its national network of photography and real estate creatives as a source to better understand the industry.

September is Marketing and Branding Month at Inman. Tips for better branding and in-depth features on how to take advantage of marketing tools provided by Zillow, Redfin and other platforms are all in the works in addition to insights from experts. You’ll find it all at Inman, as well as our two-day virtual, flagship event, Your Playbook for the Fall Market, in October.

In a new survey of 100 vendors, HomeJab, the real estate photography and video service, reveals the top concerns photographers have when working with sellers.

The “Rants & Raves” report found that 95 percent of photographers wish sellers would declutter the home before a shoot. The second-highest rated complaint, communicated by 86 percent of respondents, involved not removing large, stand-alone objects, such as bikes, hoses and kids’ toys. From there, it was general home cleaning, replacing light bulbs and cleaning exterior pathways and driveways, respectively.

HomeJab serves as a conduit between agents and visual professionals, managing the search, hiring and end-product facilitation of photos, video content and 3D tour content. Users can pay for different forms of enhanced editing.

Recently, HomeJab has thrust itself into the marketing datasphere, leveraging the activity of its national network of photography and real estate creatives as a source to better understand the industry.

In June, HomeJab partnered with image metadata company Restb.ai to record the most common highlights and what’s hidden in listing content. In January, it dug into what staging tactics are most effective.

The points raised will likely not surprise many, but until multiple listing services around the country stop publishing bedroom photos with clothes on the floor, kitchen shots with pots in the sink and backyards with broken sheds, it’s important for agents to be reminded of them, so they can remind their sellers. 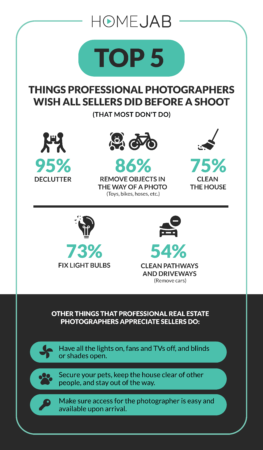 While the majority of sellers are cooperative — 67 percent, according to his survey — far too many remain resistant to listing agents’ advice, HomeJab founder and CEO Joe Jesuele said in a statement.

Of course, HomeJab’s survey reveals that sellers can make a photographer’s job much easier by simply alleviating the number of issues described as “rants.”

Respondents were asked what one thing a seller can do to make their jobs easier. The responses were mixed, according to the announcement.

“While real estate photographers need sellers to stay out of the way of their shoot, some say sellers should leave during the shoot,” HomeJab said. “But other photographers want them within earshot to get permission to make minor adjustments to improve a photo.”

Sellers via their agents should ask vendors what they can do to make photo shoots easier and more productive, such as controlling pets, moving cars and offering access to the entire home, even if certain rooms won’t make the final cut.

The blame for a bad shoot isn’t all on the seller. HomeJab’s survey includes some feedback for agents.

“Good agents will arrive at a property ahead of time and turn on all the lights and clean up anything that shouldn’t be there,” said a Cherry Hill, New Jersey-based photographer in the press release. “Bad agents show up late and demand that everything be cleaned to perfection.”

Respondents also said they wished agents didn’t promise sellers the removal of every object as if it doesn’t require effort or additional money. Agents also make unreasonable promises about how much time a shoot will take. It’s best to not suggest a hard stop, according to the survey.

Lastly, the photographer will not send the photos to the seller. The agent is responsible for the pass-through.

HomeJab has delivered more than 4,000,000 images to help real estate agents sell and rent more than $35 billion in listings, according to the press release.

In the Hamptons, a 150-Year-Old Farmhouse Comes for...