Home Price Appreciation Slowing at Rate Not Seen Since 2006

Home price appreciation decelerated in May at rates not seen since 2006 as inventory shortages eased in many of the nation’s biggest housing markets. But affordability remains a challenge for many homebuyers, and only a handful of cities have seen actual price declines, according to data released Wednesday by Black Knight.

The Black Knight Home Price Index showed annual home price appreciation fell to 19.3 percent in May, down from 20.4 percent in April, with home price growth slowing down in 97 of the 100 largest U.S. housing markets. Miami, Omaha and Grand Rapids were the only exceptions.

“The annual home price growth rate fell by more than a full percentage point in May, the largest monthly decline at the national level since 2006,” said Black Knight Data & Analytics President Ben Graboske, in a statement. “However, even with growth slowing in 97 of the top 100 U.S. markets, overall home prices still rose 1.5 percent from April – nearly twice the historical average for the month of May.” 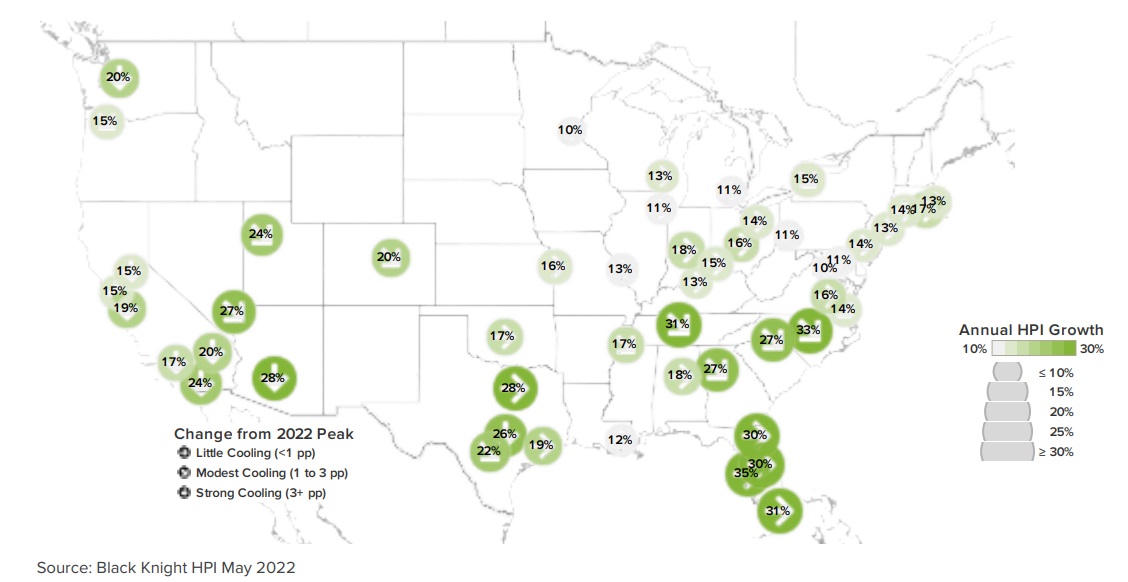 At the current rate of deceleration, it would take more than 12 months for annual home price appreciation to come back down to historic norms of 3 to 5 percent.

“That said, the pace of deceleration could very well increase in the coming months, as we’ve already begun to see in select markets such as Austin, Boise and Phoenix,” Graboske said.

Despite the slowdowns, price growth remains strong for now, and almost all major markets are continuing to see upward movement, Black Knight said.

Only a handful of markets have seen prices come off their peaks, and “the pullbacks at this point have been marginal,” Black Knight analysts said in their monthly Mortgage Monitor report. “San Jose, California, has seen the sharpest pullback and even that has been modest, with the average price dropping by 0.5 percent in recent months.”

With rates on 30-year fixed-rate mortgages hovering at close to 6 percent and home prices up 44 percent since the start of the pandemic, homes are less affordable then they’ve been since the mid 1980s, when mortgage rates soared into the double digits.

A homebuyer purchasing the average-priced home with 20 percent down can now expect their monthly mortgage payment to exceed $2,100, nearly twice the $1,089 required at the beginning of the pandemic.

As of mid-June 2022, Black Knight calculates that the mortgage payment on the average home eats up 36.2 percent of median household income, surpassing the post-1980s peak of 34.1 percent seen in July 2006.

May saw the largest single-month increase in inventory in more than five years, with active listings rising by 107,000, nearly double the traditional seasonal rise for the month.

Rising inventory won’t necessarily translate into more sales, as “the improvements we’re seeing are due to falling sales volumes rather than an increase in listings, which isn’t good for transactional revenue,” Black Knight said. 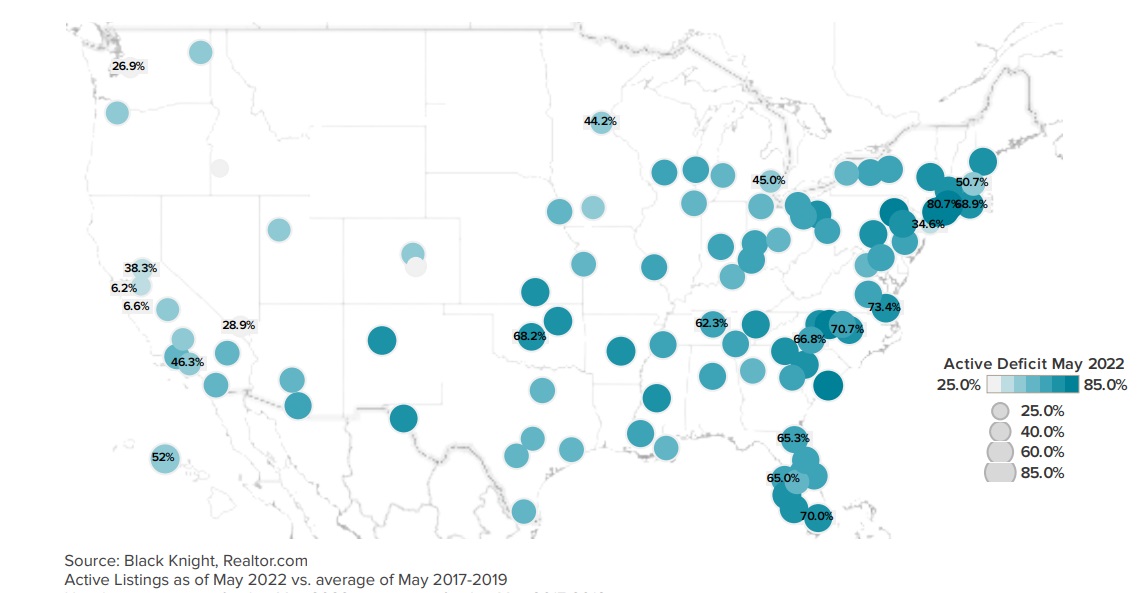 Markets like San Francisco, San Jose and Seattle are seeing the smallest listing deficits as affordability pressures and the ability to work remotely are leading homebuyers to look elsewhere, the report said.

“Given how quickly deficits are disappearing on the West Coast, those markets will be worth watching in coming months to see how prices react to a more balanced supply and demand,” the report said.