In an earnings call Tuesday, the real estate giant pointed to its Apartments.com business as a particularly successful standout in an otherwise challenging market this summer.

Commercial real estate giant and would-be residential disruptor CoStar on Tuesday announced that it earned $557 million in revenue during the third quarter of this year, while it also tallied $72 million in profit.

The third quarter’s revenue was also up compared to CoStar’s haul during the first and second quarters of this year. However, profit was down compared to this year’s two previous quarters, when CoStar earned $89 million and $83 million respectively.

CoStar’ founder and CEO Andy Florance said in a statement Tuesday that the company “delivered outstanding results across all of our business lines in the third quarter.” He also singled out Apartments.com, a portal for renters that CoStar acquired in 2014, as a standout.

“Our Apartments.com sales team delivered record sales in September, bringing our net new bookings to $90 million on a year-to-date basis in 2022, an increase of 192 percent compared to the same period of 2021,” Florance said.

Heading into Tuesday’s earnings report, CoStar’s stock climbed from under $72 per share when trading began to more than $74 per share when the markets closed. That was up for both the day and compared to the last six months — a period that has been brutal to other publicly traded real estate companies.

After CoStar published its earnings report Tuesday, shares briefly surged in after hours trading before settling back down to around the day’s closing price. 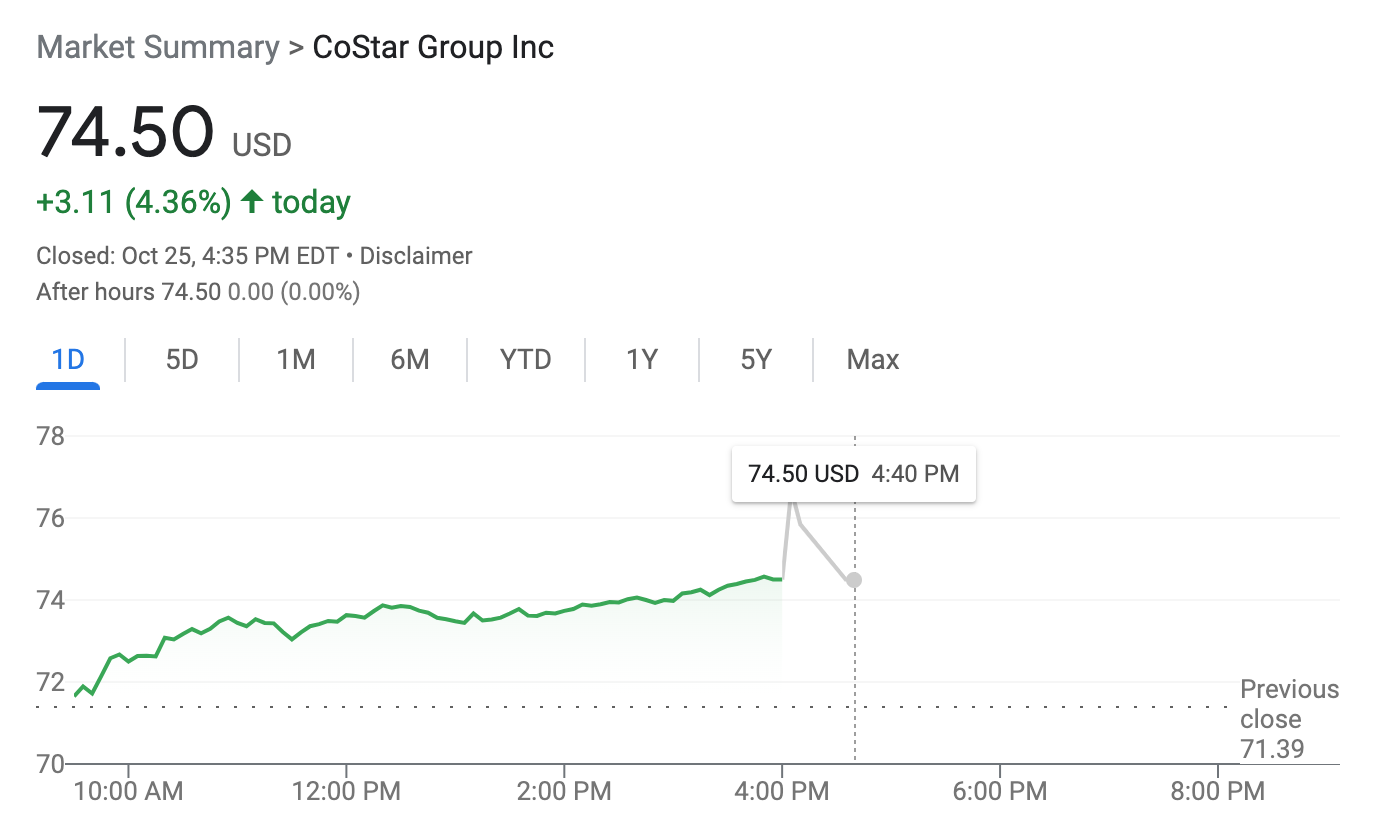 The company had a market cap of about $31 billion as of Tuesday when markets closed.

CoStar last reported earnings at the end of July. That report showed that during the second quarter of 2022 the company earned $536 million in revenue, up 12 percent compared to the same period last year. The company’s profit rose 37 percent year over year. In a statement at the time, Florance called the company’s second quarter earnings “outstanding.”

Florance founded CoStar in the 1980s and the company has long been a major player in the commercial real estate space. However, in recent years CoStar has increasingly pushed into residential real estate as well. Aside from the acquisition of Apartments.com, key moves in that process have included the purchase of residential portal maker Homesnap in 2020, the acquisition of Homes.com in 2021 and the debut earlier this year of Citysnap, a consumer-oriented portal for listings in New York City.

Such moves have increasingly pitted CoStar against existing players in residential real estate, most notably Zillow, which also runs a New York City portal. The competition has gradually grown into a rivalry, with Florance suggesting Zillow “hijacks” listings and “blackmails” agents.

CoStar’s report did not break out Citysnap’s specific financial numbers. But during a call with investors, Florance said that CoStar’s revenue from its residential endeavors added up to about $19 million during the third quarter of this year. That’s down from $24.7 million during the same period in 2021, Tuesday’s report shows.

Florance said on the call that Homesnap now has about 958,000 agents who are registered with the site. Moreover, about 70 percent of the members of the Real Estate Board of New York (REBNY) are signed up with Citysnap, Florance added. CoStar’s built Citysnap in partnership with REBNY. Florance also mentioned that traffic to Homes.com was up year over year in the third quarter.

However, Florance also pointed to rising interest rates and described the residential market as “deteriorating,” noting that such circumstances “may well create a tailwind for our business model.”

Overall, the residential real estate space has been slammed in recent months by spiking mortgage rates, slowing home sales and, most recently, dropping prices. These shifts have weighed on both mortgage companies and brokerages, and layoffs in both sectors have led to thousands of job losses. Wall Street investors have also shown a reluctance to buy shares in real estate companies that are deeply invested in technology; Redfin, Opendoor, Offerpad, Compass, eXp World Holdings and others have seen months of share price drops. Some companies, including Redfin and Offerpad, have even consistently been hitting new all-time lows every few days.

Tuesday’s earnings report is notable, then, because it shows that CoStar has apparently managed to stay profitable and post year-over-year gains even amid general trepidation about both real estate and tech — two things CoStar focuses on. Florance also said on the investor call that he plans to keep hiring for Apartments.com, suggesting CoStar believes it can continue to buck the downward trend plaguing rival firms.

“We will continue to hire aggressively,” Florance said. “We plan to continue growing the team over the next year or so until we double the sales force.”

Update: This story was updated after publication with additional information from CoStar’s earnings report and from a call executives held with investors.

Refocus your lead generation by mastering repeat and...