Steven James, who will serve as CEO, and Brad Loe, who has been tapped as executive vice president, director of sales, will focus on New York City.

The new hires are Steven James, who will serve as CEO, and Brad Loe, who has been tapped as executive vice president, director of sales. Both men were most recently serving as executive directors at HomeServices of America, the parent company of franchisor Berkshire Hathaway HomeServices. James also previously worked as CEO of Douglas Elliman’s New York City operations, while Loe was an executive manager of sales at Douglas Elliman.

In a statement, James said of his new job that “this is the right moment…the right brand.”

“Berkshire Hathaway HomeServices diligently works to be particularly agent centric,” he added. “We are the ideal brokerage for agents who may have long-term concerns about the stability of their career trajectories. Through our work here, we want to be advocates and sounding boards for these individuals, maintaining an open-door policy that fosters growth as well as greatness.”

The statement says the company is experiencing “explosive growth” in New York City, and that one month ago it signed a new lease for space on Madison Avenue that will double the footprint of its office. 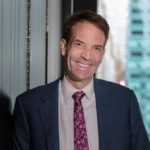 Loe said in the statement that “we will continue to grow our footprint here in the city and our impact will be transformative.”

“Our agents are our clients, and our focus will be on developing and expanding their books of business,” he said.

The duo will focus on New York City itself and will work under Candace Adams, who is the president and CEO of the three-brokerage conglomerate Berkshire Hathaway HomeServices New England/New York/Hudson Valley Properties. James and Loe will also work with Diane Ramirez, who joined the company as chief strategy officer of the New York City brokerage last year.

Adams praised the leadership team in the statement, saying that James, Loe and Ramirez will help the company “expand strategically across New York City while creating a productive, inclusive and professional work environment that also focuses on personal growth and mentorship.

“Our goal is to be the absolute best brokerage in New York,” Adams said, “knowing that we are leveraging the venerable Berkshire Hathaway brand.”

Home Tours Plummeted By Half This Year In...

Hottest homes to sell this month – so...